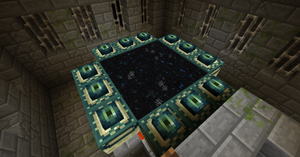 An End Portal is a naturally occurring structure that is used to travel into The End. It can only be found in strongholds, and consists of 12 Ender Portal Frame blocks, organised into a horizontal ring shape five blocks square. Each frame block requires an Eye of Ender to activate the portal.

The End Portal was part of the 1.9 Pre-release 3 update, but nonfunctional until Pre-release 4. The official release for the Portal was to be 1.9, released as 1.0.0.

End Portals are found within the portal room of a stronghold, hanging horizontally over a pool of lava, with a staircase leading up to the portal. A Silverfish spawner sits in the staircase. Some of the portal frame blocks already have Eyes of Ender in them (usually 1-2), while the rest do not.

Upon placing an Eye of Ender in every End Portal Frame block of a specific portal, the portal activates, creating 9 End Portal blocks inside the frame, and allowing the player to access The End.

The layout of End Portals can be disrupted if the End Room is intersected by Generated Structures such as Abandoned Mine Shaft, which could render End Portals impossible to activate.

Stepping into an activated End Portal immediately opens up a loading screen, and transports the player to The End - this leaves no time to back out, unlike the Nether Portal. Upon entering The End, a 5 x 5 horizontal platform of obsidian is spawned at (0,72,0), often in midair, and the player is placed on top of it. Due to the lack of a return portal being generated, the Ender Portal is one way and the End cannot be escaped from without dying, killing the Enderdragon, or entering the Nether by placing hacked in Nether Portal blocks.

The black portal blocks emit light of level 15, which is as powerful as Glowstone and is the brightest light level there is. It only takes one block of portal to teleport to The End. Through the use of an inventory hack, you can place these portal blocks anywhere, and they will still function as if they were a complete portal. The only exception to this is in The End, where the portal blocks will decay instantly. Fluids flowing through the portal will destroy all the portal blocks (but not the portal frame blocks) it comes in contact with; however, if even one portal block remains, it may still be used to access The End.

In Beta 1.9 Pre-3, the Ender Portal frame block could be broken by an explosion. As of Beta 1.9 Pre-4, it cannot be destroyed at all, except with mods, hacks and creative mode.

Activating the Ender Portal will destroy any blocks located in the center 3 x 3 square, where the resulting Ender Portal blocks will be. They will even destroy Bedrock or another Ender Portal Frame (though neither of these items will occur there naturally). It will destroy fluids, though if the source block is not also removed, then it will immediately flow back through. The destruction of the blocks does not make any sound, and applicable blocks do not drop as resources (exceptions being the top part of a door or the extended part of a vertical piston, which both destroy the whole object and drop them as resources), and events sometimes triggered by block destruction will fail to occur: TNT will simply disappear without detonating, and Block 97 will fail to spawn a silverfish. However, Chests, Dispensers, Furnaces, and Jukeboxes will all drop their contents.