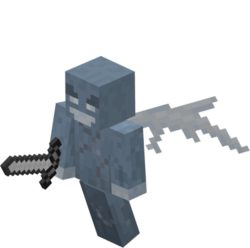 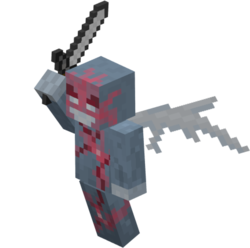 Vexes spawn naturally only as part of an evoker's summoning attack; the evoker signals this attack by producing off-white smoke and a high-pitched horn-like sound. Exactly 3 vexes will appear near the evoker. The evoker will summon vexes even if there are some still left alive from the last summoning.

The iron sword they hold normally has a 0% chance of dropping, because their main hand's HandDropChances is 0. However, this chance increases by 1 percentage point per level of Looting. If dropped, the sword will be badly damaged.

Vexes are hostile mobs that will naturally attack players, as well as villagers, iron golems and any other target as commanded by their summoning evoker. They are capable of flying through the air, and will pass through any block, including water, unharmed and uninhibited. When they are attacking, they glow red and lunge at their target. Like most Nether mobs, they are immune to fire, and thus are not affected by fire blocks or lava.

Vexes summoned by an evoker will start to take damage after 30 to 119 seconds, and will eventually die. This does not apply if the vex is summoned by a spawn egg or by the /summon command.

When idle, vexes will wander within a 15×11×15 cuboid range centered on their evoker's position, unless summoned by a spawn egg or by the /summon command.

Vexes have entity data associated with them that contains the various properties of the mob. Their entity ID is vex.