This style guide exists to establish a single convention for write-ups of redstone circuits and mechanisms.

Each redstone structure should be described by some combination of text, schematic(s), and screenshot(s).

Structure Name
Structure names should be descriptive and unique, but it is not necessary to create unique names for structures which are topologically similar (they perform the same action with the same components but vary in the exact position of the blocks).

Arrangement
In general, the "primary" description should go to the left or top. (For English; in languages that are read right-to-left, make that "right or top".)

Describe any important features of the structure. Some topics to address might include:

Usage
Describe the purpose of the structure. Explain why it's used or what function it serves as part of a larger structure.
When writing up a number of structures which all provide the same function, consider writing the usage section only once to cover all of them. For example, if you are writing up a number of AND Gates, you could use a single usage section to discuss the purpose of AND Gates and then move on to describing the different ways to build an AND Gate without having to duplicate a discussion of their usage with each structure description.
Usage is the only part of the description that should be considered required for every redstone structure (or for a set of structures which provide the same function).

Features
List significant features of the structure. Possible features include: 1-wide, 1-high, flat, flush, silent, etc. Other important features include a structure's tileable size (the minimum dimensions in which it can be tiled), the delay it incurs as a sub-circuit, etc.

When describing a structure's size, list it as H1×H2×V (i.e., the two horizontal dimensions, then the vertical dimension), with the shortest horizontal dimension first (for example, 1×5×3 for a structure 1 block wide, 5 blocks long, and 3 blocks high). Always include any required blocks in the structure's dimensions, including blocks necessary to support redstone components. (That is, "in-a-void" dimensions.) Note that most "flat" circuits will be counted as two blocks high, except for the very few which need no supporting blocks. Use &times; to create the multiplication symbol, ×, or just use a letter x. In a table, you can boldface any 1's in the sizes, to highlight 1-wide and no-support circuits.

Terminologie
Explain any new terminology used when naming or discussing a structure. If explaining the terminology would be complicated enough to overwhelm the discussion of the structure itself, consider linking to an explanation of the terminology provided somewhere else.
Like usage, this part of the description may be needed only once for a set of structures which provide the same function.
Examples:
If no new terminology is used, omit this topic.

Construction
Explain any construction details not obvious from screenshots or schematics.
Also explain whether there are issues that may arise due to the order in which you build a structure. Some structures will not work correctly unless certain blocks are placed in the correct order, others may (undesirably) start operating like a clock if some blocks are placed before others, etc.
If there are no important issues with the structure's construction, omit this topic.

Behavior
Some structures may benefit from an explanation of how they work. For example:
If behavior is obvious, omit this topic.

Variations
Discuss significant topological variations (using the same components and mechanics, but arranged slightly differently). Minor variations don't need to be discussed if they don't offer some benefit over the original design. Use additional schematics to illustrate variations, if necessary.
If there are no significant variations, omit this topic.

Earliest Known Publication
List the date that the structure was first published. Cite original publication as reference.
If the earliest publication date is unknown, omit this topic.

Topics don't necessarily need to be titled in the structure's description -- a single paragraph might address multiple topics with a sentence each, or each topic might consist of multiple paragraphs for a complicated structure.

example schematic (in this case, an AND gate)

The preferred method for creating schematics on the wiki is the schematic template.

It is permissible to upload screenshots of schematics from redstone simulator programs, but expect them to get converted by someone else later (or you can do it when you get the chance). Don't use animated GIFs to show multi-layer schematics -- the speed of animated GIFs cannot be modified by the viewer, and not everyone can read schematics as quickly as they appear and disappear.

Large or numerous schematics can overburden the server when trying to render the page:

There are two methods for handling too many schematics, both involving "offloading" schematics to subpages that can be loaded into the main page at the user's request:

Use LoadBox rather than LoadPage when possible, because it keeps the majority of the article's content within the article, making it easier to read through the article and ensuring that search results lead to the article and not to a subpage with no obvious means of getting to the main article.

Add {{Schematic help}} to the caption of the first schematic in an article, and to additional schematics if that would be helpful. This will create a standard help link to Help:Schematic.

Use the standard identifiers for different roles instead of your personal block preferences. These generate schematics that match the conventions used for § Screenshots. For redstone circuits, the important distinctions among blocks are solidity, and opacity vs. transparency.

), and identify their role in the text.

Temporary blocks (meant to be placed, then removed while building) can be shown as any easily-removed block that's not otherwise used in the diagram, and would not behave oddly. Some options are dirt or leaves. It's not necessary to show blocks that would only be used for placing other blocks (such as putting a block in midair).

Anywhere a particular block is needed, use that block. Examples include dirt or farmland for farming, obsidian for durability, and so on. If you have options, use the least expensive or least exotic block that would do (e.g. Jack-o-lanterns rather than glowstone).

Any use of darkening should be explained in caption or text. For MCRS diagrams, darkening meant "solid block above"; since that has been replaced by the transparent sprites (see below), a darkened block is now ambiguous. However, it can still be used to indicate occasional stacking, or other situations that would otherwise require a separate level diagram.

Lightening is used to indicate a significant block that would not normally be shown on this level, and is not covered or underlaid by this level. Usually, that means the input and/or output blocks, but you can use it sparingly to avoid an extra level diagram that would just be one or two items.

Repeating sections of an expandable circuit can be indicated with ellipsis sprites.

Multi-layer schematics can be done two ways. Use whichever seems more understandable, but don't mix them for a single structure.

Multiple single-level schematics
Single-level schematics, each showing all blocks, dust, and components at the same Y coordinate, with no stacking. Each level of the structure gets its own schematic. A variation of this is the sideview schematic for 1-wide structures. This is recommended for non-redstone schematics, as it is less burdensome on the server and few blocks have transparent versions.

One or more dual-level schematics
Dual-level schematics show two levels at a time: blocks, components, or empty space, but all in a two-block layer. For three- or more-layer circuits, do a separate schematic for each pair of adjacent levels: 1/2, 2/3, and so on. These might make circuits clearer, but be aware that stacked sprites count extra against the page limits.
Use the transparent sprites (SB-u, MB-u, ts-u, and BR-u) for blocks that are "covering" another block. One solid block atop another can be shown by darkening the block. If you are stacking blocks of different colors (say, a mobile block atop a stationary one), note it in caption or text, as this will otherwise be unclear.
If there are only one or two items on a third level, you might be able to use darkening or lightening to avoid an extra layer diagram, but make sure the result is understandable (then note it in caption or text anyway). Otherwise, don't try to cram in a third level.
Not every circuit is suited for dual layers, and especially mechanisms don't do well; if it looks confusing or you are having trouble showing what's going on, switch back to single-layer diagrams. 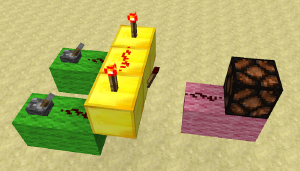 Example screenshot (in this case, an AND Gate)

Along with redstone schematics and written explanations, screenshots illustrate the correct way to construct redstone structures. When creating screenshots, structures should be built and shot in a consistent way so that users can quickly learn to identify which blocks in an image are part of the structure and what they do, and which blocks are there to help explain it, etc.

Everyone has their own opinions on which blocks should be used in screenshots. So why these blocks?

The
Block of Gold was chosen as the primary opaque block because it most closely matches the solid yellow symbol used for blocks in most redstone simulation software. Its edging also makes it easy to count and differentiate.

The
Block of Diamond was chosen for moving blocks because its texture is similar to the block of gold, but its different coloring makes it easy to pick out the moving parts of a redstone structure.

The upside-down
Stone Slab was chosen because glowstone is a little too similar in coloring to the block of gold, slabs are less complicated than stairs, and the stone slab is easily recognizable as a slab.

Lime Wool and
Pink Wool were chosen for inputs and outputs because "green starts the circuit, red stops the circuit" is an easy metaphor to remember (but the lighter versions -- lime and pink -- are used because redstone wire shows up better against them).

Background
Structures should be built and shot in front of a plain, non-distracting background.
The preferred background is a sandstone superflat world (like the Redstone Ready superflat preset), with no other blocks or mobs in the picture. Other possible backgrounds might include: the void, the sky (for under-shots, with clouds turned off), or other superflat worlds made from grass block, iron blocks, glass, etc.

Positioning
Build structures off the ground (free-floating in the air) so that they can be shot from any direction and so that it's clear exactly which blocks are part of the structure.

Blocks
Use the following blocks to build the structure and then remove all unnecessary blocks:

Input/Output Lines
When it would be helpful to understand the structure, include additional blocks outside of the structure to illustrate how signals enter and exit the structure.

Preparation
Before taking a screenshot, take the following steps:

Editing
Screenshots may need clean-up to improve clarity, but this may require some knowledge of image editing software. If you don't know how to do this, or can't, go ahead and upload your image -- hopefully someone will fix your image later (yay, wikis!).

Upload the image to the Minecraft Wiki.

Add the screenshot to an article.
Images that aren't used by articles may get deleted after a while.
To add a default thumb like the example screenshot above, use [[File:FILENAME|thumb|CAPTION]].