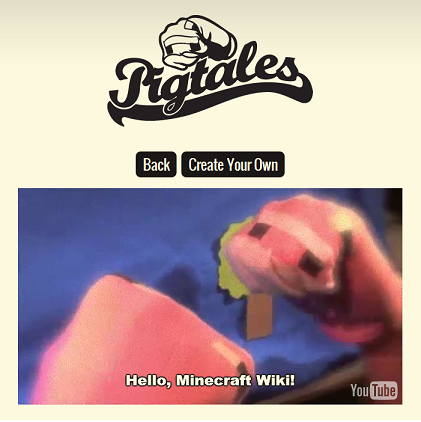 Pig Tales is a mini site within www.minecraft.net that allows you to create and share your own piggy conversations that stars two Minecraft Pig sock puppets known as Pig #1 and Pig #2 in front of an obviously fake set. The conversations end with a dramatic zoom-in on Pig #1. This site is possibly just a joke pulled by Mojang and nothing more serious. The films are made in retro style and are "produced" by a fake Swedish company called Mackapar Films.

The mini site was set up on August 22nd, 2011 and on August 26th, the Pig Tales conversation has been revealed and you can buy Minecraft socks made by a Swedish company called Happy Socks. http://www.happysocks.com/ca/colabs

The game can be found at http://pigtales.minecraft.net/.