The Minecraft stand alone client is a downloadable offline client that was released on June 30th 2010 for Windows, MacOS X and other systems that support Java such as Linux. It will run any version of Minecraft up until Infdev and later. The client is able to connect to survival multiplayer servers as well. Client mods only work with the stand alone client as they directly modify minecraft.jar, the executable of Minecraft. Before beta 1.3, a new version of the client was released with new features including a changelog and links to Mojang staff twitter accounts.

Client version 1.2.2 does not accept the command line arguments that previous versions accepted.

Client versions up to 1.1 accepted command line arguments to automatically login and optionally join a server. Format to login without joining a server: 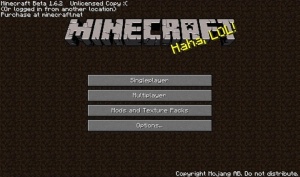 A picture of a pirated Minecraft copy

The stand alone client only requires an internet connection for the first time run and for automatic updates. After that the game can be played offline with ease.